(March 22, 2018 – Toronto) Yesterday, the Ontario Waterpower Association (OWA) hosted its fifth annual Queen’s Park Day at the Ontario Legislature. Throughout the day, MPPs and candidates from all parties were briefed on the results of a recent public opinion poll conducted by Innovative Research and commissioned by OWA. The analysis provided insight into the public’s views on electricity issues broadly, and waterpower specifically.

“Despite the widespread perception that Ontario has too much electricity, the reality is that, as early as 2024, the province will face a shortfall due in large part to the retirement of nuclear assets,” said Paul Norris, President of the OWA. “When given a choice among options, the public across all regions and political affiliations strongly supported the expansion of waterpower to meet future needs.” 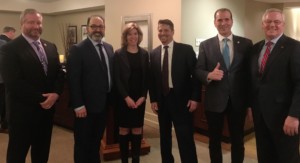 “Waterpower is supported by all parties and has been the backbone of a reliable electricity system for more than a century, continuing to play an extremely important role going forward,” added Norris. “The OWA looks forward to working with all current and prospective  members and new members leading into and following the June election.”