The City of Kawartha Lakes and County of Haliburton are known to many in the province as Central Ontario’s tourist and cottage destination. This area has abundant forests, lakes and beautiful outdoor scenery. 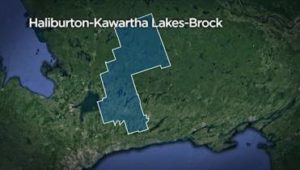 Kawartha Lakes is the second largest single-tier municipality in Ontario by land area and home to more than 75,000 permanent and 30,000 seasonal residents. Just 90 minutes North East of Toronto, Kawartha Lakes has a variety of beautiful communities, each with their own unique charm. Nearly 1.4 million people visit each year seeking the cottage lifestyle made possible by the 250 lakes and rivers.

Like Kawartha Lakes, Haliburton County’s economy is dominated by tourism. The north part of the County of Haliburton borders Algonquin Provincial Park. The ratio of properties occupied in the summer months to properties occupied year-round is about 3 to 1. Haliburton County has been dubbed the “Haliburton Highlands”. The Haliburton Highlands region is one of the higher points on the Canadian Shield. Amalgamated in 1983, the County consists of four municipalities including the Township of Algonquin Highlands, the Municipality of Dysart et al, the Municipality of Highlands East and the Township of Minden Hills.

Perhaps something not as widely known is that since 1925 this vast area has also been the home of several waterpower facilities. Some of the facilities are tucked away in the back country, while others are located right in the heart of small towns. Waterpower has been a central part of these communities and in some cases (ex. Fenelon Falls), a common meeting place for tourists and residents. Below is a list of the waterpower facilities in this region listed in chorological order of development. 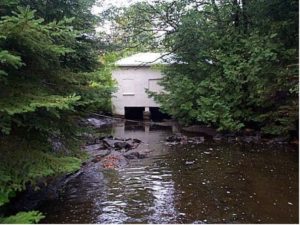 The Drag Lake Generating Station (GS) and Drag Lake Dam are located on the Drag River, east of the village of Haliburton and west of Drag Lake. The Drag Lake Dam is owned by the federal government and is operated by the Trent-Severn Waterway. Operation of the waterpower facility is permitted and governed by a lease agreement that provides Algonquin Power with the permission to maintain and operate the intake on the Drag Lake Dam. The powerhouse is a concrete building, originally constructed in 1925 as the Haliburton Municipal Power Plant and has a capacity of 220kW. The original generating station supplied electricity to the Village of Haliburton and prior to the plant’s rehabilitation in 1991-92 it was also supplying electricity to some residences and a lumber yard. 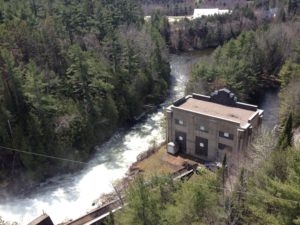 The Minden GS is located just outside of the town of Minden, on the Gull River. It is owned and operated by the Orillia Power Generation Corporation. The increase in demand for electricity during the depression prompted the construction of this station, by men working under the Unemployment Relief Work Act. This powerhouse has been generating reliable power since 1935, and is known for its distinctive art deco design. Orillia Power Generation Corporation, formed in October of 2000 as a result of the Electricity Act, 1998 is a subsidiary of Orillia Power Corporation which is wholly owned by the City of Orillia. At full load water flows, this plant has the capacity to produce 4 MW of electricity. 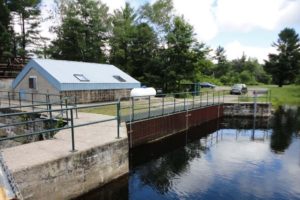 The Elliott Falls GS is located in southeastern Ontario on the Gull River just north of Norland, Ontario. The site was originally developed at the beginning of the 20th century to supply power to a nearby cement factory. The plant was decommissioned in 1928. In 1988, the Ontario Ministry of Natural Resources released the site for development as part of the government’s initiative to encourage private development of small hydro sites. The redeveloped facility was commissioned in 1990. The plant has a total capacity of 700 kW. Bracebridge Generation became owners of the Elliott Falls GS as of May 2016.  The company has been producing electricity since 1894 and currently owns and operates 9 hydroelectric generating stations in Central Ontario totaling over 12 megawatts. 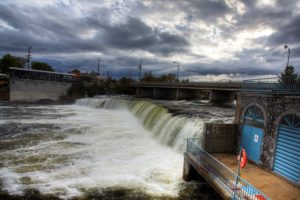 The Fenelon Falls GS is located in the village of Fenelon Falls. The facility is owned by Shaman Power and is situated on the north bank of the Otonabee River along Lindsay Street. The Fenelon Falls GS is a 2.6 MW waterpower facility. Connected to the Trent Severn Waterway, Lock 34 is located on an island. The beautiful falls can be found on the lower side of the lock station. This year the Fenelon Falls facility will be taking part in the City of Kawartha Lakes Doors Open event on September 8th, 2019 from 10am – 4pm. The Doors Open event is great opportunity for those interested in getting a sneak peek inside a waterpower facility, or wanting to learn more about how waterpower works.