(November 7, 2018 – Toronto) The 18th annual Power of Water Canada Conference (POWC) was held last week, in Niagara-on-the-Lake, ON. Approximately, four hundred (400) delegates from around the globe attended this event. On the evening of October 30th, the OWA hosted its annual awards ceremony, recognizing the contribution of industry leaders.

“It is always important to recognize the outstanding contribution of individuals and organizations within our industry,” said Paul Norris, President of the Ontario Waterpower Association. “This year’s recipients demonstrate the qualities of leadership and dedication that set an aspirational example for the entire sector.” 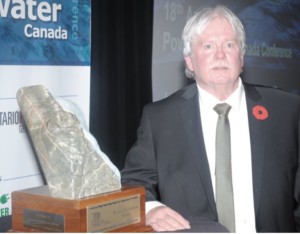 The 2018 R.R. Dodokin Award was presented to Richard (Rick) Donnelly of Hatch Ltd. Rick has had an impressive career in dam design for hydroelectric developments, is widely recognized as an innovator and leader, and has meaningfully contributed to the current state of dam safety practice in both Canada and abroad. 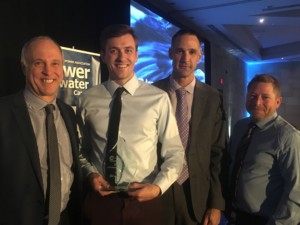 The 2018 Stewardship Award was presented to Energy Ottawa for the expanded Chaudière Falls Generating Station. Energy Ottawa’s goals for the Chaudière Falls Generating Station have always been three fold: to produce clean, renewable energy in an environmentally responsible way; to provide a publicly accessible space to be enjoyed by all; and to serve as a place of recognition and celebration of Canada’s First Nations and Ottawa’s industrialist past. 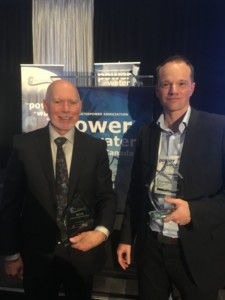 The Innovation Award was presented to Ossberger Hydro Inc. and Shaman Power for the work done on the Elora Hydro Electric Facility. The 1 megawatt (MW) run-of-river facility took advantage of the rebuilt Drimmie Dam. The project is located where a 1911 power plant was situated and was built using the footprint of the old structures, such as the canal and powerhouse building. The powerhouse contains a single crossflow turbine-generator unit supplied by Ossberger Hydro Inc. The unit is able to operate from 5% to 100% of its total capacity, which results in higher annual energy production given the wide fluctuations in river flow over the course of a calendar year.

Next year’s 19th Annual Power of Water Conference and Tradeshow will be held again at the White Oaks Conference Resort from October 21st – 23rd, 2019. Save the dates!